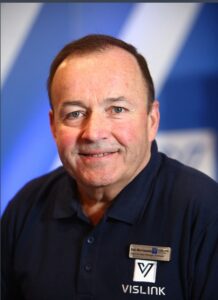 It is with sadness but much affinity and appreciation that Vislink announces the retirement of Bob Morrissette from the company at the end of 2019.

Bob, who has most recently served as Northeast Regional Sales Manager for Broadcast at Vislink, has been a fixture in the broadcasting industry for nearly half a century. He has spent his entire career at Vislink and the companies that evolved into it and has been on the front lines of many of the new technologies that were developed in the microwave industry.

Bob started his career in 1973 at Microwave Associates, a company that traced its heritage back to 1950. Among other achievements, Microwave Associates produced microwave components used as building blocks for radar, missile and communications equipment on the Polaris submarine, B-52 bomber, Mariner II Venus Probe, and the Telstar satellite. Bob’s career progressed with the company as it grew and changed its name after several acquisitions to M/A-COM. Among the positions he held were Test Technician and roles in Systems Engineering and Purchasing.

In 1985, when Microwave Radio Communications (MRC) began, Bob joined its Northeast Sales Team and has been on the sales side ever since. Bob and current Vislink team members Andy Larsen (Regional Sales Manager), Eric McCulley (Director of Sales Operations) and Vance D’Arcangelo (Solutions Engineer) are the last employees remaining at Vislink who came up together at MRC. 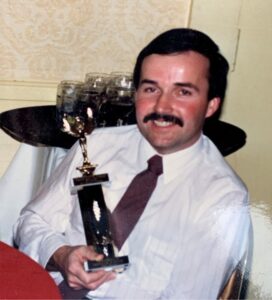 During his sales career, Bob Morrissette developed a reputation for building and maintaining deep and long-lasting customer relationships. He often said that meeting with customers and taking care of their needs was his favorite part of the job. He truly understood the value of his customers’ business and took care of his clients with a tireless, old-school devotion to service that he was known to extend across any hour of the day or night.

Due to his extensive industry contacts, knowledge of the business, caring reputation and sales success, Bob was affectionately known as “Mr. Microwave.” It was a well-deserved title and reflected the loyalty and support he had toward his customers, and that they felt toward him in return. More often than not, his customer relationships wound up becoming customer friendships. According to Eric McCulley, Bob seemed to have friends everywhere, and he recalls that any time they would be driving together on sales calls, Bob would constantly honk and wave at someone he recognized.

Many within Vislink were touched over the years by Bob Morrissette’s warmth, camaraderie and willingness to support his colleagues. Linda Sousa, Regional Sales Manager (Law Enforcement, Public Safety and DoD), remembers how he went out of his way to ease her anxiety about attending her first NAB event. Bob’s good friend Andy Larsen recalls how they came up through the ranks together and how Bob was a mentor to him and other young reps when he got into sales. According to Andy, Bob was also a world-class prankster, and Andy often found himself on the unsuspecting receiving end of one of Bob’s practical jokes at NAB or other events.

In addition to his impressive career, Bob Morrissette is also known outside of work for his deep love of family, friends and community. He is a larger-than-life figure in the city of Lowell, MA, where his strong  involvement in local activities has resulted in some considering him the honorary or unofficial mayor of the town. Bob and his family are also prominent supporters of Lowell General Hospital, and in particular the TeamWalk for CancerCare, which raises funds to support the hospital’s Cancer Center services for patients and their families.

Bob has also volunteered his time as a referee of girls’ basketball games. According to one of his Vislink friends, he has been known to blow his ref’s whistle at fans for their off-court supposed infractions, as well as the players!

Bob Morrissette will be missed by his colleagues at Vislink as well as his fellow professionals throughout the broadcasting industry. Everyone at Vislink wishes Bob all the best in this new chapter of his life and we thank him for his years of friendship, professionalism and service.

At the heart of the action

This website uses cookies to improve your experience while you navigate through the website. Out of these, the cookies that are categorized as necessary are stored on your browser as they are essential for the working of basic functionalities of the website. We also use third-party cookies that help us analyze and understand how you use this website. These cookies will be stored in your browser only with your consent. You also have the option to opt-out of these cookies. But opting out of some of these cookies may affect your browsing experience.
Necessary Always Enabled
Necessary cookies are absolutely essential for the website to function properly. These cookies ensure basic functionalities and security features of the website, anonymously.
Analytics
Analytical cookies are used to understand how visitors interact with the website. These cookies help provide information on metrics the number of visitors, bounce rate, traffic source, etc.
Advertisement
Advertisement cookies are used to provide visitors with relevant ads and marketing campaigns. These cookies track visitors across websites and collect information to provide customized ads.
SAVE & ACCEPT